What is it?
It can be defined as the method which provides an opportunity to check biomarkers in the blood – chemicals floating around in the blood – and organise them into “easy to understand” patterns, which highlight relationships it would otherwise have been impossible to make. It gives the practitioner a view of the trends in the functions of body systems that then clarifies understanding of how disease processes start and how/when they could be stopped. Effectively.

The blood is one of the principal tissues of the body. Some even argue that it is an “organ-system” on its own. The body has multiple organ-systems that are all interlinked and interdependent. The blood is unique in that it is one system that “touches” all of the about 30 trillion cells that the body comprises of. It takes nutrients to the cells and removes their waste products at the same time.
In this wise, it is easy to understand that if anything is “going wrong” in the body the first place to locate it would be in the blood. It is for this reason that blood testing is one of the cornerstones of western medicine process of diagnosis. It has been said that it is possible to see where dysfunction is likely to occur 3 or even 4 years before the disease profile actually presents itself, if one looks in the blood.

Our current medical systems use a graph profile that takes the average individual’s data and present it as Normal. The first thing to note here is the principle of Biochemical Individuality. We are all different. Even single ovum twins i.e. twins made from a single egg that was fertilised before splitting into two, creating the twins, exhibit differences. In that case, using the average factor leads us down a cul-de-sac that is most unhelpful. The second thing to note is that this individuality means that even if the results for a patient falls within normal range, their genetic propensity may have dictated something different, such that they are already in a “diseased state” even when the result is screaming “normal”. The third and most important fact is that a patient usually will not visit a doctor until some degree of damage has been done. It is the symptom from that damage that is the driving factor that gets them to the doctor. Therefore, we need to establish optimal ranges – ranges at which the body’s systems perform without hindrance and work smoothly. Using statistical averages has done a lot of damage and allowed patients to suffer needlessly. Most of our normal ranges are too wide to detect problems before they become definite pathologies.

This type of analysis is built around changes in the physiology of the systems rather than trying to check for pathology. Original thinking in physiology states: “structure is dependent on function”. This means that IF function changes, then structure will have little choice but to follow.

The human appendix is a great example. It was part of a larger caecum, but once dietary changes demanded a change in function, the structure shrank!
Another major difference in the functional approach is the move away from “individual biomarkers” pointing the finger towards dysfunction. The functional analysis approach is not linear, but one that groups biomarkers in such a way that it is possible to apply the relationships to show a deeper influence of developing dysfunction, even when definite disease profile has not emerged.

A great example to use here is the application of PSA (Prostate Specific Antigen) to indicate dysfunction in the Prostate gland. It has been shown that rising levels of Monocytes and of Creatinine in the blood also point towards a Prostate gland that is beginning to struggle. A low level of the Alkaline Phosphatase, which is indicative of a deficiency in Zinc, also points in the same direction of impending Prostate difficulty as almost 80% of the Zinc in a man’s body reside in the Prostate gland. A few other biomarkers like Insulin, Prolactin and Fibrinogen, markers used principally for other conditions pull together to complete the picture of possible Prostate issues, which if not dealt with expediently could give rise to extreme difficulties in the future.

A Zinc deficiency also points towards a struggling immune system, while a sub-optimal Vitamin D level points to the same thing. A spider-web network of relationships then appears that indicates probabilities of dysfunction, which allows for pre-emptive action to avoid / reverse a developing dysfunction. 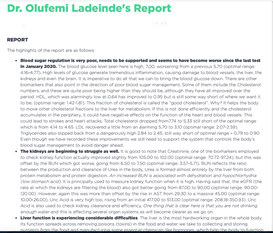 After the functional blood analysis has been done, a comprehensive report is generated that not only lays bare the relationships between organ-systems that are faltering or frankly struggling to cope, but also indicates the deficiencies that are responsible for the dysfunctions. It allows us to see in detail, sometimes for the first time, how deeply disruptive certain nutrient deficiencies could become to the system balance which is the hallmark of a healthy body.

Having a blood test done is now no longer just an adjunct to the process of diagnosis. It has become one of the most vital components of health maintenance and health retrieval if there is dysfunction or frank pathology. The age of a doctor looking at a bunch of numbers and trying to decipher what the body is saying is gone. Welcome to medicine of the New Age! The test results may be useful, but in the hands of a proficient functional analysis professional, it becomes a critical roadmap to health.

Lifestyle Physicians Can we stop cancers from forming?